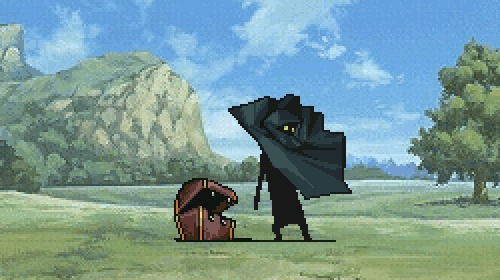 Mimicry Man is a freeware Mimic simulator by Kazusa Norakumo made in RPG Maker 2000. Ultimately, it's a puzzle game.

The Dark Lord has tasked Mimicry Man with defeating the Hero, just because.
To lure him, he'll ultimately need to obtain the Solar Sword the Hero seeks.
And Mimicry Man knows only one technique: show people what they want, then ambush!


Download Mimicry Man 1.07 | (Mirror)
(Chrome may falsely flag the download as malicious, but it's safe to ignore.)

Supported Platforms
The game's engine is made for Windows only, with no native support for other platforms.

Below are charts for all the item trades and fusions, in sort of the order you use them. This basically spoils the whole point of the game, so only consult it if you're really stuck!