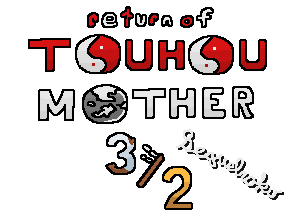 • Return of Touhou Mother is an RPG Maker 2000 game created by S-tele. There's also Kirai Shouen on graphics, mao and ALiCE TAiL on music, and Mifo on programming (the battle system).

It is the sequel to Touhou Mother, but you can get away with not playing the first game. (It's not as good.)

Six months have passed since Porky was driven out of Gensokyo.
In the outside world, Ness and Paula are just trying to relax when Iku appears with an unusual request.
Meanwhile, Koishi and Satori, having been cooped up underground for months, decide to take a look at the surface.
What has become of Gensokyo? And what will become of it?

(Chrome may falsely flag the download as malicious, but it's safe to ignore.)

• Supported Platforms
The game's engine is made for Windows only, with no native support for other platforms.

If the font doesn't seem correct, download and install the MS Gothic font.

RPG Maker 2000 has some inherent, unfixable control bugs ("automatically moving in a direction" or "no buttons work"). The issues often seem to involve gamepads, or getting "stuck" on an input if Shift and a Numpad key are pressed simultaneously. Thus, try fiddling with gamepads and your keyboard until it fixes. (Reinstalling the game likely won't help.)

If you get "not implemented" errors on or near startup, make sure you have a working sound device (speakers/headphones). It can also occur mid-game if your system doesn't like a particular MP3, in which case, try to delete or replace the file in Music.

You may get "RPG Maker 2000/2003 RTP is not installed" or missing file errors on startup. This can happen if the path contains special symbols, causing files (including RPG_RT.ini) to not be found. Try moving the game folder somewhere without any special symbols in the path.


• Battle Memory
Unofficial (written by me) Battle Memory entries for every enemy. Contains spoilers for all enemies and bosses.